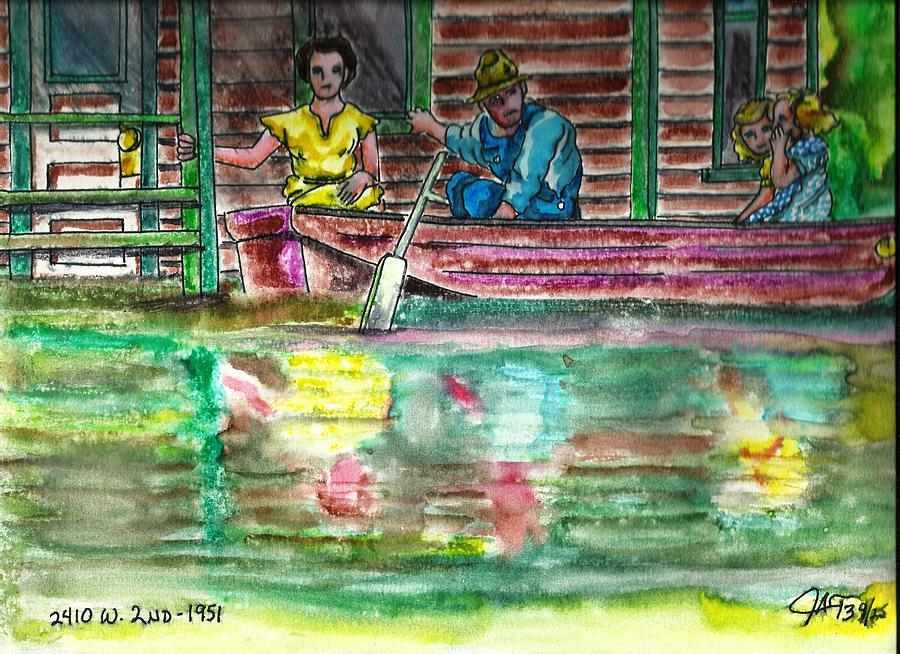 "2410 West 2nd: 1951" By; J.A. George - Water Color on 9" x 12" Cold Press Paper.
The photo that inspired this painting is from the collection of Judy Perkins of Topeka, Kansas. It documents the day in 1951 that a neighbor man took Ms. Perkins, her mother and sister on a rowboat ride through their flooded home at 2410 West 2nd Street in Topeka, Kansas. Little Judy is peaking around her sister who is wiping a tear from her eye. Their Father was in another row boat in the foreground taking the photo.
The original photograph had a sudden impact on me as I had a similar experience 42 years later in 1993 when again the Midwest suffered a great flood. Just like when Topeka became a victim of rain swollen rivers and tributaries in 1951 so too did Baxter Springs, Kansas become a victim in 1993.
I was at a family reunion in Weston, Missouri in September 1993 when disaster struck. The Grand River authority in Oklahoma refused to open their flood gates to relieve the swollen Spring and Neodesha Rivers because they had just installed new playground equipment that spring and they did not want to lose it. So 100�s of families in Ft. Scott, Pittsburg, Riverton, Baxter Springs, Kansas and Miami, Oklahoma lost their homes and worldly possessions to protect a swing set.
Our home in Baxter Spring was the first to succumb to the rising waters and by the time I arrived all that could be seen of our house was the peak of the roof. After making sure that my wife, at that time, Tammy and my boys Michael and Ricky were OK I asked about the animals. Tammy informed me that Breeze A Dog was safe at a friends house but she wasn�t sure about Miss Kitty. Tammy said that the last time she had seen her she was asleep in the linen closet. �She may have got out when we were removing stuff from the house, I don�t know. I found a Cherokee County Sheriff�s Deputy and asked him to take me down to the house in a boat so that I could make sure Miss Kitty had got out safely.
As the Deputy maneuvered his boat around to the back of the house I grabbed his fire extinguisher and once the boat was in position I used it to bust out the kitchen window. As the shards of glass slowly sunk in the Khaki colored muck I yelled out; MISS KITTY! A faint meow came from somewhere inside the house. The water was within just 6 inches of the ceiling and trash, food and furniture floated in the foul smelling water.
�Get me to the back door� I instructed the Deputy, �I�m going to kick in a panel on the back door and go in for her.� The Deputy said, �Are you sure you want to�� But suddenly stopped in mid sentence looking hard into the window by the back door. �She�s in that room!� He exclaimed, �I can see her eyes.� Taking the fire extinguisher I busted out that window and looked inside. On the far side of the room a set of box springs was floating and clinging onto the edge of those springs, her head held up above the water was my Miss Kitty.
The Calico Cat yowled mournfully, her wide eyes scared. As the Deputy held onto my belt with one hand and the eave of the house with the other I reached through the broken window for the bed springs. As my fingers made contact Miss Kitty ran up my arm clinging to my shoulder the way she had clung to the bed springs. I resettled into the boat and as the Deputy maneuvered us up what had once been 7th Street Miss Kitty nestled her water soaked body into mine purring softly.
As we arrived at Main Street there were News Crews from NBC, ABC, CBS and FOX waiting for us. Someone had alerted the news media that a cat rescue was taking place and for 15 minutes Miss Kitty enjoyed her fame.
This story has a happy ending, of sorts. Miss Kitty, Breeze A Dog, Ricky, Michael, Tammy and I survived the great flood of 1993. We lost irreplaceable items but saved a priceless object, Miss Kitty. Floods are horrible things that cannot even be imagined by anyone who has never had to endure the cleanup of the mud, muck, ooze and gunk. The smell seems to never go away and you feel dirty for months after. Yes a Flood is horrible but for those of us that have lived through a flood we can be a little more sympathetic and understanding of the strength that it takes to recover and start a new. We have the power of the water that took our comfort and gave us a strength stronger that the flood that washed it away.

Judy Perkins Said: "During the 1951 flood in Topeka our neighbor man took my mother, sister and me on a rowboat ride through our house at 2410 W. 2nd. I am the girl in back looking around my sister. Sure brings back memories...I think my dad must have taken the photo from the boat in the foreground. It was quite a scary feeling riding through the various rooms inside. My sister was already wiping away a tear."