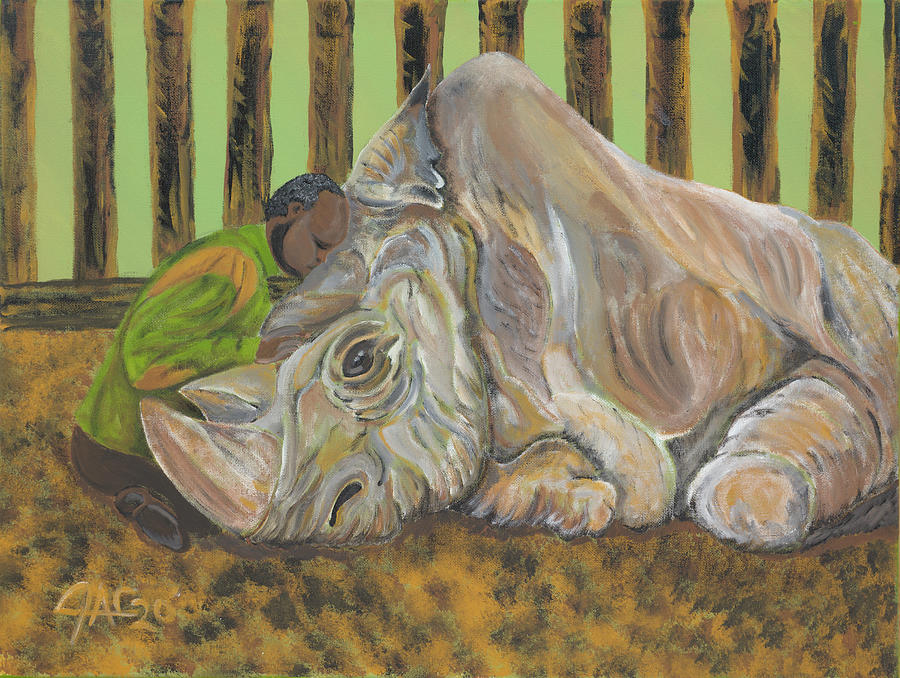 THE LAST GIANT By: J.A. George AKA; The GYPSY

His name was Matthew Dillon Ceratotherium Simum. We just called him Matt and he was just 15 years old when he died. Matt was also the last of his kind. Matt was the last wild caught Southern White Rhino and he was my friend.

Matt stood 6’ at the shoulder and weighed in at around 5,000 pounds. Captured in southern Africa when he was just a year-old. Matt was shipped to the United States to the San Diego Zoo in California as part of a conservation of species program. After his capture international restrictions were implemented that kept any more Southern White Rhinos to be exported from Africa.

Matt eventually was loaned out to El Paso Zoological Park in El Paso, Texas. The hope was that Matt, whose bloodline was unique and not found in any other Southern White Rhinoceros in North America, would breed with the two female Southern White Rhinos also on loan from San Diego. The Two Females were Miss Kitty, a 17-year-old female who stood 5’ 6” at her shoulder and weighed in at around 3,500 pounds and Daisy May. Daisy was a young and vibrant 10 years old and weighed in at a trim 3,000 pounds and was a petite 5’ at her shoulder. Of the 3 loaned Rhinos Daisy was the most social. But Matt was King.

I received my introduction to my 3 charges when I became lead Keeper of the Hoof stock area in June of 1983. I was used to dealing with small and large species alike. Having come from Abilene Zoological Gardens in Abilene, Texas I had helped birth a Giraffe that was born breach. I had assisted the Herpetologist in getting the 10’ Alligator Humpy back into his enclosure numerous times. Humpy had a Gypsy Soul and liked to wander. My life had been saved by an Asian Elephant 9a story for another day), and I had assisted walking 3-year-old African Elephants around the Zoo Grounds. There are numerous more examples I could give of my work with large species, but you get the idea.

Yet when I was first introduced to these 3 giants, Matt, Miss Kitty and Daisy, I do not think that I was prepared for the welcome I received. The Zoo’s Vet Tech, Claudia Newman, did the introductions. As we walked up the long drive to the central Hoof Stock barn, I could see the 3 Rhinos watching us from their enclosure to our left. This enclosure was large. It swooped down from the central barn towards a lower gutter that sat at the base of a 10’ concrete retaining wall. At the top of this wall and protected from the edge by a short fence and planter that surrounded the hoof stock exhibits the public could look down into the Rhinos curved 100’ x 50’ x 30’ exhibit.

The exhibits substrate was caliche dirt, commonly called desert concrete. This dirt was ideal for Rhino’s with one exception. Miss Kitty was allergic to the dust from this dirt.

As we entered the hoof stock barn the 3 Rhinos rushed up to the stockade fence. This fence was made from concrete anchored wooden utility poles. The poles showed wear from the Rhinos need, like overgrown cats, to rub against them. In this stockade barrier there was a cutaway that was 4’ high and just wide enough for two Rhino heads and that is what greeted us as we walked up to the opening, two Rhino heads belonging to Miss Kitty and Daisy.

Looking at Rhinos from a distance is not like being a foot away from them. It is a little disconcerting at first being nose to nose with a head that is almost as large as your entire body. Claudia made the introductions; This is Miss Kitty, and this is Daisy. Both animals snorted at the sound of their names. That, she indicated the large male Rhino standing back away from the females is Matt. I laughed, “Matt Dillon, Miss Kitty and Daisy?” Claudia nodded, “Yep, the saloon girl.” We laughed and it seemed as if the Rhino’s laughed with us.

Claudia showed me how to apply the Hydrocortisone cream around Miss Kitty’s eyes to help with her allergies. Miss Kitty was used to this routine and stood still as the cream was applied. Daisy nudged her big square upper lip against my forearm. “She wants you to scratch her nose.” I scratched her nose and she purred. I gave Claudia a look. “They are as intelligent as dogs but have many mannerisms like a cat.” She pointed at their wallow, a pit containing their urine and feces in the middle of the exhibit. “They always do their business in the same spot. They rub on things to scratch and leave a scent. They purr and…” Claudia scratched Miss Kitty behind the ear. “They love to be scratched behind the ear.” Miss Kitty half closed her eyes and purred.

Suddenly Matt moved forward and shoved the two females out of the way. His mass made Miss Kitty and Daisy look small. He laid his head on the fence and snorted stamping a rear foot once. “He let’s the females get attention first but when it comes to who eats first the Marshall of Dodge City is first up to the table.’ I laughed and said, “Being from Kansas and being a fan of Gunsmoke I can totally understand the Marshall exercising his rights.” Matt seemed to like the statement as he turned his head towards me and snorted.

Claudia handed me a bucket of sweet horse and mule feed and I held it for Matt as he happily chowed down. When he had enough, I repeated the scenario with Miss Kitty and then Daisy. The hierarchy was obvious, and it would be a scenario that was repeated twice a day in the upcoming months. We took a bale of alfalfa hay from the large stack in the center of the barn, broke it apart and threw it into the exhibit. Claudia said, “Time for the shit cart.”

We rolled the large metal cart into the exhibit and down to the wallow. Using pitch forks we began cleaning out the feces and throwing it into the cart. (I bet you thought a Zookeepers life was all glamour and playing with animals.) At one-point Matt approached us snorting and stomping. Claudia picked up a dirt clod and chucked it at Matt hitting his thick hide on the shoulder. The dirt clod exploded in a rain of dust and Matt ran back up to where Miss Kitty and Daisy were enjoying their breakfast. “Sometimes he likes to show his dominance, but dirt clods shake him up and put him back in his place. He is really a gentle giant” Claudia explained. “Let’s hope I never run out of dirt clods.” I said.

We dumped the Shit Cart in the Zoo’s large dumpster, hosed it out, put up our tools and moved on to care for the next animals; White Tail Deer, North American Bison, Dromedary Camel, Nilgai Antelope and Ostrich. This was my morning routine everyday but twice a day I got to spend quality time with the Rhino’s, and we became close.

June turned to July. July turned to August and August turned to September. Matt and I became close. He started liking the type of attention Miss Kitty and Daisy craved. I no longer had to use dirt clods to spook him; I had learned his language. When he challenged me, I challenged back. I stomped my foot and snorted. I commanded him, “Matt, Get Back!” He would turn and retreat. I had exercised my dominance. Matt was King when I wasn’t around, but I was King when present. But it was more than that. I had developed a deep respect for Matt and the females. I believe with all my heart that respect was returned in kind. In short, we liked each other.

Now do not misunderstand what I am saying. Rhinos are wild animals, and it should never be assumed that they are domesticated in any way. There is an old Zookeeper saying, “Never Turn Your Spine On A Bovine.” In other words, never let your guard down and I never did. One day Matt became agitated because of some unruly children in the public viewing area. His agitation was beyond my control to spook him back. I had to run up the 10’ retaining wall, a trick I had learned as a way to save my life long before parkour was a part of the English language. This skill would again come in handy at a critical time in the relationship between me and Matt.

Wow! I just read the story! What a fantastic writer you are.

It is sad, however, your artwork is very beautiful. L/F